Please read Alain DuPuis’ pick for Alanis Morissette: Jagged Little Pill before reading and listening to our reviews below.

The year was 1995, the grunge movement was coming to an end and the strong feminist message from the Riot Grrrl movement was never going to get mainstream radio play. Enter Canadian mall-pop sensation Alanis Morissette with her 3rd album Jagged Little Pill. A huge kudos to Alanis for wanting to be something different than manufactured mall-pop. She left her Canadian home of Ottawa and moved to Los Angeles where she met and had and instant connection with producer Glen Ballard. They would collaborate on experimenting with her sound and they co-wrote most all of the albums tracks. This album was a monster and sold 33 million albums and counting. Have a listen to our review of this mega album and see if it stood the test of time and what we thought about it now. You’ll enjoy this one.
The Sonic Collective 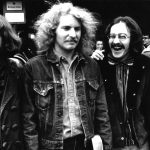