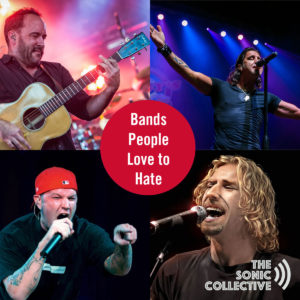 Some bands are universally acknowledged as being incredible. Monumental albums, amazing concerts, solid track records, and they’ve survived the test of time. But then there are those bands that, despite posting huge record sales, play sold-out tours worldwide, and hold a place in popular culture, are reviled by many and are the butt of industry jokes.

This month, we’ll take a closer look at  four bands who find themselves in that category. The bands? In no particular order, Creed, Limp Bizkit, Dave Matthews Band, and of course, Nickelback. More on each of them below…

These groups have all achieved an enviable amount of commercial success. They’ve sold millions and millions of albums worldwide. They could announce a new tour tomorrow and expect to fill most venues to capacity. And yet, for whatever reason, people just love to hate them.

But why are they hated? And by who? Is it justified? What do people like about them, and more importantly, what do they supposedly hate?

Each of us is going to take a look at one of the aforementioned bands, and make a case for why we think they deserve all the love – and hate – that they receive. This will certainly be an interesting one. Let’s take a closer look at the bands we’ll be exploring this month.

Formed in 1994 in Jacksonville, Florida, Limp Bizkit led the charge of Nu Metal bands in the late 90s and early 2000s, alongside contemporaries like Korn, Slipknot, and Linkin Park. Limp Bizkit was notable for blending rap and hard rock elements, featuring often juvenile and angst-filled lyrics that would make mothers everywhere blush. It’s no wonder that the band mostly appealed to disaffected youth who were into skate and hip-hop culture.

The lineup has been largely consistent throughout their 27 years together. Fred Durst is the boisterous frontman known for his signature red baseball cap and “look-at-me!” attention-seeking behavior, both on and off the mic. Wes Borland is a criminally underrated guitarist. Perhaps his skills are overlooked because he often dons full body makeup and costumes, both on stage and in videos. Sam Rivers keeps the bassline flowing and provides backing vocals. John Otto, formerly a jazz drummer, now keeps time for the band. And DJ Lethal, once a member of Houses of Pain, now covers the turntables, sampling, and programming for Limp Bizkit.

Dave Matthews Band is an American rock band formed in Charlottesville, Virginia in 1991 by singer-songwriter and guitarist Dave Matthews.

During the period from 2000 to 2010, his band sold more tickets and earned more money than any other act in North America. The band’s 2012 album Away from the World made them the only group to have six consecutive studio albums debut at number one on the Billboard charts. This record was extended to seven consecutive number one albums with the 2018 release, Come Tomorrow.

Creed was formed in Tallahassee, Florida in 1994 and went on to become one of the most successful post-grunge bands of the 1990s and 2000s. Their sound has also been described as being hard rock and alternative metal. The original and main lineup was Brian Marshall (bass), Scott Phillips (percussion), Scott Stapp (lead vocals), and Mark Tremonti (guitar).

Despite selling more than 53 albums worldwide, and topping the Billboard charts many times in the 2000s, in 2013, readers of Rolling Stone magazine voted Creed the worst band of the 1990s. With fans on one side and haters on the other, Creed remains a band that is firmly rooted at both ends of the spectrum.

After dominating the airwaves and charts with three hit albums in the 2000s, the band then released their fourth album, Full Circle, in 2009, but disbanded in 2012, as singer Stapp became addicted to pain medication, among other reasons. Members have since formed other bands and pursued solo careers, but not to much acclaim.

Nickelback is a Canadian rock band formed in 1995 in Hanna, Alberta. It is composed of guitarist and lead vocalist Chad Kroeger, guitarist, keyboardist and backing vocalist Ryan Peake, bassist Mike Kroeger, and drummer Daniel Adair. It went through several drummer changes between 1995 and 2005, achieving its current lineup when Adair replaced Ryan Vikedal.

Nickelback is one of the most commercially successful Canadian rock bands, having sold more than 50 million albums worldwide. In 2009, Billboard ranked it the most successful rock group of that decade; “How You Remind Me” was the best-selling rock song and the fourth-best overall. The band ranked at No. 7 on the Billboard top artist of the decade list, with four albums among the publication’s top albums of the decade.

Statistically, you are probably well familiar with these bands, but just in case, bone up on your knowledge, explore their discographies, and join us back on September 1st to hear our thoughts on whether these four bands deserve the hatred among certain groups of people. 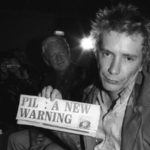