For our last pick of our double-album round, Sonic Collective member Scott Gregory picked this ambient, synth-pop, adored album, M83’s Hurry Up, We’re Dreaming. Listen to this full review as we chat about how we enjoyed our pick for November 2020, which marks the 6th anniversary of our podcast. Have a listen to how the album impacted us and what our impressions were.

Hi all you people out there in Collective land. It’s me, Scott G, here to present our pick for November 2020, which is also the last of the double album round. As you know, Alain picked our last band, Frankie Goes to Hollywood. This was right up my alley because I’ve spent a lot of time with 80s and 90s Brit synth and pop. 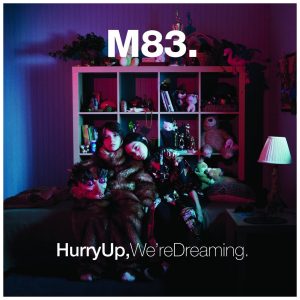 I was really torn on what to pick for this round. Looking through a bunch of top-10 lists there were a lot of great options. I was leaning heavily towards Bruce Springsteen’s The River, Led Zeppelin, Pink Floyd…lots of solid, safe picks.

But stretching out into top 50 lists, the band M83 caught my eye. First, because the name was unusual, and as far as I could tell I’d never even heard of them before. Their double album’s from 2011 and is called Hurry up, we’re dreaming.

Coming off a Brit synth pop from the 80s, I thought it’d be cool to pair it with some more synth from 30 years later and across the channel. Will there be cultural differences we can detect in the album? Will there be an evolution we can trace back? How will it feel coming off an overtly sexually charged album into something more atmospheric?

Their sixth studio album, coming in at a tight 73 minutes, I’m really hoping for a  polished and deeply immersive double record. I don’t usually listen to a lot of ambient music, and I hope this is as new and interesting for you all as it will be for me.

So with that, let’s start our journey together with the Sonic Collective’s November, 2020 pick: M83’s 2011 double album, Hurry up, we’re dreaming. See you at the end month.