Please read and listen to Alain DuPuis’s pick for Eric Clapton: Unplugged  before reading and listening to our reviews below.

Alain DuPuis, the best at back-flipping of all The Sonic Collective members, decide that it was time to pay respect to legendary blues/rock guitarist Eric Clapton. Unplugged was all the rage in the early 90s and this album along with Nirvana: Unplugged really catapulted the genre forward.
An album full of blues standards as well as some epic Clapton hits made this the best selling live album of all time. Listen to The Sonic Collective members as they let you know how this album stands up.
Here is a few things you’ll find out by listening this month:
• Pro: Everyone loves this album Con: Everyone loves this album
• What other world famous guitarist almost joined Clapton’s band
• How much Clapton sold one of the 2 guitars he used to record this
Listen up and please leave us a comment.
The Sonic Collective

Eric Clapton – Unplugged
Alain DuPuis, July 2018
This month’s pick is Eric Clapton’s album Unplugged.
Recorded in front of a live audience in the winter of 1992 in England, Unplugged represented a stripped down version of Clapton’s music. Bluesy and soulful, the album went on to receive nine Grammy award nominations, ultimately winning six, including Record of the Year, Album of the Year, and Song of the Year. Not a bad haul for one performance. 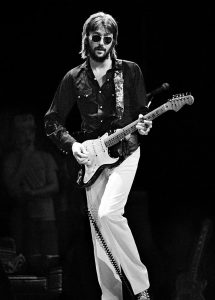 Eric Clapton was a musical giant long before he recorded Unplugged, lending his talent as a guitarist to such notable musical acts as the Yardbirds, and Cream.
Born in Surrey, England, Eric first picked up a guitar at age thirteen, but within three short years, he managed to achieve a large amount of notoriety for possessing advanced prowess with the guitar. As he continued to play around the country in a number of different musical outfits, Clapton forged a distinctive style and rapidly became one of the most talked-about guitarists in the British music scene, an accolade that would dog him – for better or worse – for decades.
Despite professional success, Clapton’s personal life has been troubled. At various times he has faced tragedies, loss, and heartache, battled depression, and fought a crippling addition to drugs and alcohol, but he has always managed to overcome – a feat he attributes to his music, stating: “I almost subconsciously used music for myself as a healing agent, and lo and behold, it worked … I have got a great deal of happiness and a great deal of healing from music.”
His music has undoubtedly also brought happiness and strength to millions of fans around the world.
Let’s dive in to Unplugged.
Eric Clapton – Wikipedia
Unplugged – Wikipedia
iTunes
Amazon