Please read Scott Gregory’s pick for Prince: Purple Rain before reading and listening to our reviews below.

Though we can easily quote member Scott Coates when he says “This is a masterpiece!”, we will. This truly is a masterpiece. We rarely do a 5 Star rating but we did on this one.
However, this review is great. Find out not only factoids about the album, but also find out things like:
• How awesome or not the movie was
• Who Darren made out with to this album
• Why dancing impaired to Herb Alpert came up
Listen up and please leave us a comment.
The Sonic Collective

Prince – Purple Rain
Scott Gregory
We only have a couple rules here at the Sonic Collective on how we pick albums;

BUT – It can be a soundtrack if it’s entirely original material, composed and compiled for this purpose.
I’m glad we made this caveat, because there’s an album that’s considered one of the greatest of all time, usually ranked first or second behind Michael Jackson’s Thriller for best album of the 80s. It’s a soundtrack to an album of the same name.
The Sonic Collective’s album for January 2018 is Purple Rain by Prince and the Revolution. 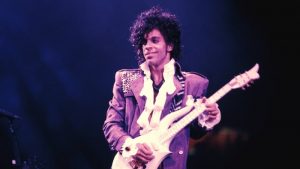 The sixth studio album and the first to feature The Revolution, it’s sold over 25 million albums worldwide and is the third best-selling soundtrack behind Whitney Houston’s the Bodyguard and The Bee Gee’s Saturday Night fever.
But, let’s take a moment and reflect on the fact that Meatloaf’s Bat out of Hell, has outsold all three of them. That’s RIGHT. Greg, I miss you.
I’ve put together a little gameplan for this pick to try and really get the most out of this album.
I’ve heard all of Prince’s singles, but never listened to a full album. Apparently this is a real departure from his earlier work, so I think I’m going to start off by listening to the first five Prince albums for context before getting into this album.
After listening to the album a couple times I think I’ll go and watch the movie again. It’s been easily a decade so I can’t even remember most of it, but it’ll be fun to see where the album matches up with the scenes and themes in the movie.
Whether you go all the down the rabbit hole or just want to give the album a couple listens, I hope you join us at the end of January to discuss Prince and the Revolution’s Purple Rain. Cheers.
Purple Rain the album on Wikipedia
Purple Rain the movie on IMDB